Two days of intensive workshops, sharing and, ultimately, caring for one another’s projects at the REAL GIRLS REEL CHANGE retreat made for a riveting final day at the 92Y Tribeca. Here, the six filmmakers were given opportunity to share and “pitch” their projects to interested nonprofit organizations and funders invited by Working Films.

Stephanie Wang-Breal (Wo Ai Ni Mommy) takes us through the day:
In the morning, each of the six filmmakers were given 10 minutes to present a clip from their work and talk about their community engagement plans:

After lunch, the filmmakers had “Quick Quality Time” (Speed dating without the awkward connotations) with attending nonprofit organizations and funders to brainstorm about possible collaborations: 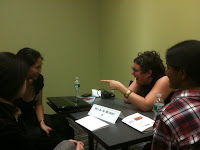 At the end of the day, both the filmmakers and attendees were asked to share what they learnt from the workshop. Kate Gottlieb Kingswell, from Girls Scouts of the USA, really summed up the sentiment we wanted involved parties to be able to derive from the experience.

We are really proud of the progress our filmmakers made over the course of three days, as evident in Stephanie’s thoughts here.

But that’s not all! Working Films had invited a group of students from the Bronx, who write and perform poetry, known as the Power Writers to come and witness the day. They listened, engaged and ended our day for us with some poetry they had written from what they had learnt. Yes, they had written this over the course of a few hours – not a single person wasn’t left unmoved by their extraordinary abilities.
Check them out on the Chicken & Egg Youtube Channel here.

Thanks to my colleagues at Working Films, Chicken & Egg Pictures, The Fledgling Fund and 92Y for really creating a space for filmmakers to say “I don’t know” and nonprofits to say “I can help!”