Rose and Nangabire at Story Leads to Action

Missed last week’s invigorating Story Leads to Action at the 92YTribeca that we co-hosted with Chicken & Egg Pictures? Fear not, filmmakers Elizabeth Mandel and Beth Davenport have agreed to share their lessons learned from the evening for your benefit: 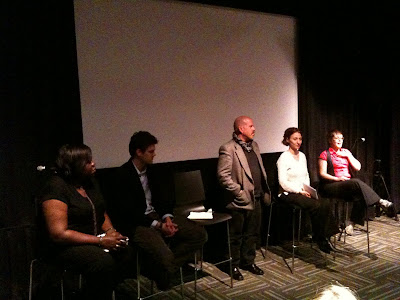 Three years after filming the reunion of a Congolese girl and her mother, separated by war in Congo, Rose & Nangabire (working title) is almost complete. The work-in-progress screening last Thursday was an exciting opportunity to share our work outside the edit room. With a focus on audience engagement, it was also invigorating to finally explore in a public forum how the film can be used to create change.

Ideas and thoughts generated by the post-screening discussion included the following uses for the film or modules created from the footage:
•    Reaching policymakers and practitioners who are often, due to politicization, desensitized to the issues Rose and her family confront and challenge.

•    Targeting schools, because the presence of a teenage refugee going to high school in the film will make the issues accessible to a youth audience.

•    Partnering with the Department of Education to train teachers who work with refugees and other ESL populations.

•    Bringing together diaspora communities, for example by creating a women’s-only discussion group, and/or a group for teens, where survivors of war can have a safe space to share their experiences.

•    Working with women- and girls- leadership programs to provide a portrait of a strong, resourceful role model.

It was also pointed out that while embarking on our project we need to assess who is already doing this work and can program the film into their existing frameworks, and who can use the film to take their work to new places. This thought brings us to our next phase, solidifying relationships with organizations that address our three issue areas, and finessing the ways in which Rose & Nangabire can be used to help them in their work. As we finish up the film and begin to screen at film festivals, we’re also looking forward to using this momentum to inspire thinking and follow up action on the part of general audiences as well.

Stay tuned for announcements about our festival premiere and the launch of our audience engagement plan. In the meantime, if you are in any way involved with our issue areas — refugee rights and resettlement; peace-building and reconciliation; and women in post-conflict situations — please be in touch, we’d love to hear from you. We can be reached at elizabeth at artsengine.net or beth at artsengine.net.