The Fence (La Barda) Story Leads to Action: Activism and Art Working Together

On November 11th, Working Films, Chicken & Egg Pictures and The Fledgling Fund screened The Fence (La Barda) for November’s Story Leads to Action. Natalie Difford of Chicken & Egg gives us some highlights on how activism and art are working together: 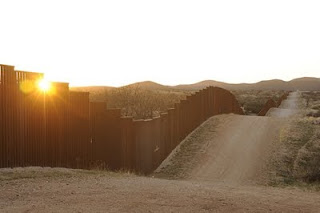 In October 2006, the United States government decided to build a fence along its troubled border with Mexico. 3 years, 19 construction companies, 350 engineers, thousands of construction workers, tens of thousands of tons of metal and more than $3 billion later – was it all worth it? That’s the question posed in Rory Kennedy’s latest HBO Documentary The Fence (La Barda) as it investigates the impact of the project, revealing how the fence’s stated goals – containing illegal immigration, cracking down on drug trafficking and protecting America from terrorists – have given way to unforeseen consequences.

The takeaway from the night was how important action is in order to change policies and get results. As Judith said, “A documentary is not a silver bullet” and an audience member expressed feelings of helplessness, “What do I do with all this disgust I feel?” We know the fence is already up, but that does not mean that everything is said and done. There are still issues on the table, like Arizona law, that can literally be changed by people getting involved and working to fight for legislation they believe in. How can this film be used in order to enable real change?

–> Target the audience members; congresspeople, journalists, editorial boards, conservative citizens.
–> Address some of the major issues; what is behind the actual crossing of the border, and what corporations are making money off of anti-immigration policies. 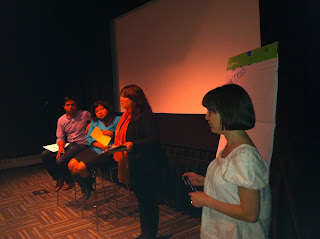 Judith & Molly facilitate a discussion after the screening

When doing outreach for a film like this, audience and panelists agreed that it is important to have a geographic focus, and to organize around a political landscape. For example, creating a campaign targeted around specific states where legislation is still subject to change or could seriously effect the lives of the citizens who live there.

The film manages to have a comedic affect, largely because of the absurdity and inefficiency of the policies in place. However, for the panelists, Andre Segura and Christina Baal, the issues are very pertinent and painful.

The discussion was greatly focused on the relationship between activism and art. Interestingly, Christina stated how important it was for these issues to be presented by artists, because it is hard for activists and lawmakers to present the issues in new ways.

Be sure to mark your calendar for next month’s Story Leads to Action featuring A Small Act by Jennifer Arnold on Thursday, December 16th at 7:30pm at 92YTribeca. Check out the trailer below: